an old processor, continuous gameplay that is heavy on resources, dropped it too many times and something is about to blow? So recently the battery in one of my old test phones, a Droid 3, went bad and I have to constantly plug this phone in to keep it charged. Since I don’t use this phone for anything other than testing apps I was hard pressed to drop $8 on a new battery knowing that I can probably get away with using this old battery for another year as long as I don’t mind keeping it on the charger like a heroin addict on methadone. The only issue that I was having now though is the phone battery overheating during charge times (I hope it doesn’t blow up, but this is a distinct possibility so disclaimer: don’t use bad batteries) getting so hot that it could probably leave a 2nd degree burn if applied for long enough.

One day, while scrapping a motherboard I pulled off a little heat sink and got a brilliant idea. Why not stick this little guy on the back of my phone? So I grabbed some thermal paste and voila! 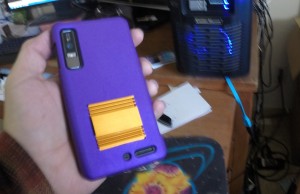