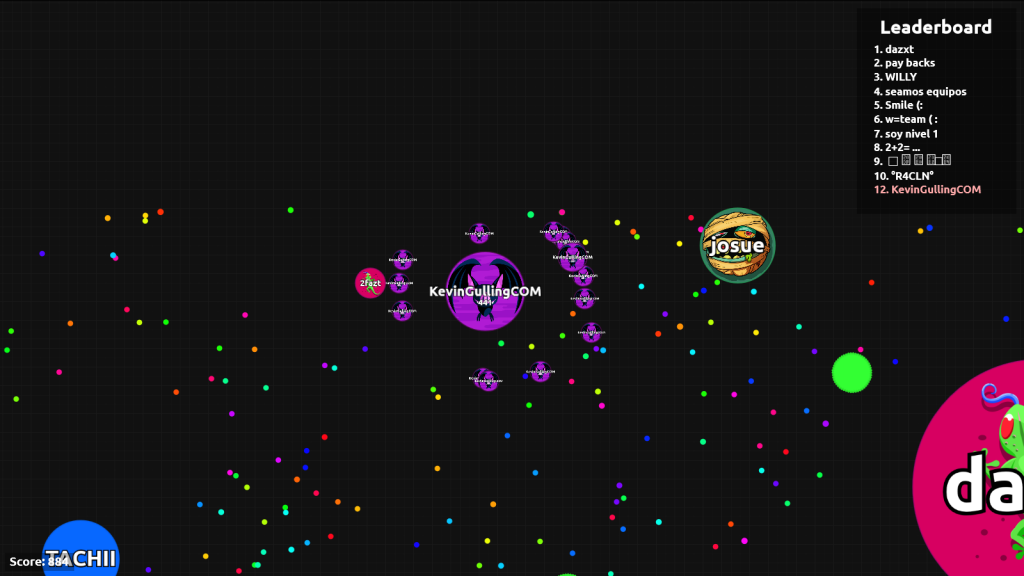 Mass Ejection – Press ‘W’ on the keyboard to eject mass in the direction you are traveling. There are many reasons to eject mass, but most commonly it is used to transfer mass from one cell to another. If you see two opposing cells doing “feeding” each other in FFA, watch out, this is most likely a team! (Teams dominate FFA, go figure).

Split Mass – Press ‘Space’ on your keyboard to split your cell in half, ejecting one half in the direction you are traveling. The most common reason one would opt to split in half is to “eat” another cell. Make sure you are more than twice the mass of the cell you are trying to eat, or it will fail and you will either not be able to eat the cell you targeted, or if you overestimated your mass by too much, the cell you target can even eat you! Another common use for this function is to avoid being eaten entirely! When being hunted by larger cells a well timed split will insure that only half of you is eaten, and you will live to see another day! If your cell is smaller than 38 mass, you will not be able to split).

Strategies – There is one strategy that works fantastic for me most of the time. This method involves spending about 5 minutes or so farming mass particles and avoiding all larger cells, and maintaining a friendly relationship with cells in your size range (chasing a slightly smaller cell is usually fruitless, and will likely get you both killed!). Also it’s wise to keep in mind that when you are a small cell, you are a huge target! Trust no one! In the video below I’ll show you how to use this strategy to make it onto the leaderboard in about 10 minutes.

Of course one of the most popular strategies is the social game in Agar.io. Feed the right cell and you might have made a friend for life (of your cell)! But watch out, there are those who will eat you even if you do feed them. A good sign that a cell is willing to cooperate is if they eject some mass back at you in exchange. Also beware of traders though! About 50% of the cells that try to make friends, do so only to eat cannibalize their friends! This is a strategy that I don’t really recommend, as it may be a quick boost, but generally you will make an enemy for life by doing so, and getting revenge is one of the sweetest things to do in Agar.io! 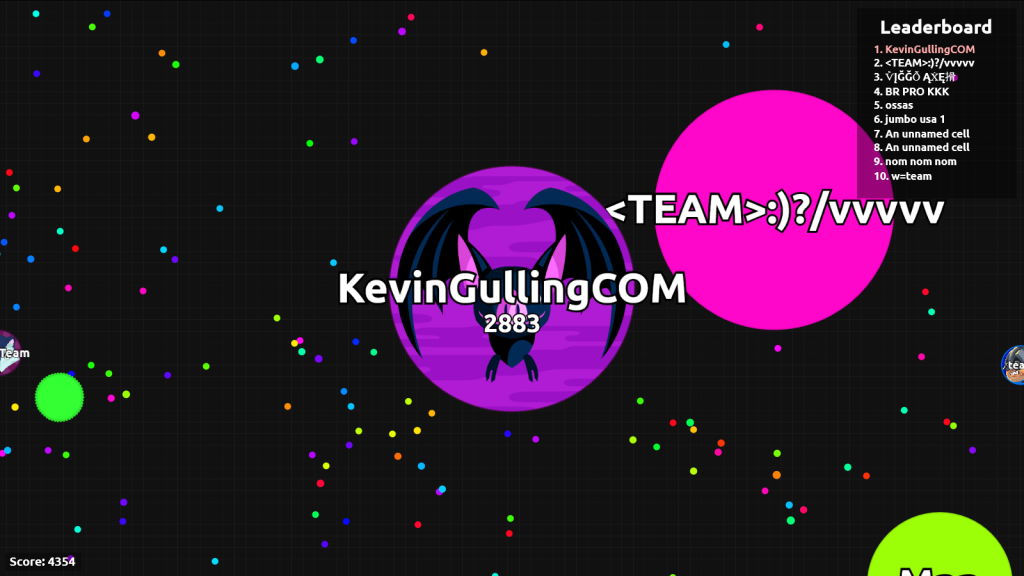 With a good teammate it’s easy to dominate the map!

Hacks/Cheats – It’s likely that some bad hacks exist for this game, but I’m not going to be covering any hacks of that sort. There are “legal” hacks that I will focus on instead. The most common being using your name field to communicate to other cells with language or symbols. A popular use of this is for teams to use a “tag” on the beginning of their username, so that they can easily be identified as a teammate no matter what skin the cell is using. For example a couple popular groups are “MK” and “FBI”, and when they play they generally have a large team working together to easily dominate the entire map for hours on end! Another popular use is to mention teams in your name. Usually a cell with the name “team” is willing to cooperate, but still watch out for the predators, not every cell named team is actually friendly!

Another simple hack is to log on every hour and collect 20 free coins. When you want to play, if you have a couple hundred coins you can pick up a nice boost that lasts for an hour, which can be very helpful!

Now to the good stuff! If you want a real edge over the competition, you might decide that using ‘W’ and ‘Space’ are not the easiest keys to use. Sometimes you really have to mash that ‘W’, and sometimes you have to be very precise! Using a programmable input emulator we can change those keys to whatever keys we like! I am using GlovePIE, an old but still working PIE utility. FreePie is another one. There are others out there, let us know in the comments if you know of any other good PIE’s! The script I like to use is making the left mouse button work as ‘W’ in addition to ‘W’. If you need to eject some mass quickly, you can mash both the ‘W’ key and the ‘LMB’ and eject an incredible amount of mass very quickly! Download the Agar.io GlovePIE script.

Pro Tips – Now that you know the basics, here are a few pro tips to remember: