If you haven’t heard of Diep.io then you have been missing out. Never has controlling a small circle that shoots small circles been so entertaining!
Diep.io is a multiplayer browser game that requires no downloads or long signups. Simply enter your name and start playing!

The game is fairly simple, you enter your name and press enter to start. Use the arrow keys to move and the mouse to aim. Click the LMB to fire your cannon.

You start out as a small tank

The objective of the game is to get points and there are 3 ways to earn them.

You can destroy things either by colliding with them or shooting them with your cannon. Be careful though, other players will shoot back and collisions also do damage to you!

When you earn points you increase your XP, when your XP reaches a certain level you level up. Leveling up can grant you stat increases. Pay attention to the bottom right of your screen, the stats menu will popup when you have enough XP to level one up. There are 8 stats that you can increase: Health Regen, Max Health, Body Damage, Bullet Speed, Bullet Penetration, Bullet Damage, Reload, and Movement Speed.

There are two basic modes. FFA and Team Deathmatch. FFA is a free for all, no teams (even though some people do team up, Pro Tip: you might see people spinning around and not firing at you, they are indicating that they want to partner with you), while Team Deathmatch is a two team battle, Red vs Blue.

There are two main strategies in Diep.io

It’s important to decide early on in your build which of these 2 major strategies you will adopt. Fight or Flight!

I’m not going to go over the 10’s of popular builds, I’m just going to go over a few that I came up with*. It’s important to note that the build orders are not as important as some people say. Basically if you are going for “Fight” you will want to start out building Max Health and/or Health Regen. For “Flight” strategies you will want to start out leveling up your Movement Speed.

The OctoArmor can match almost any build 1v1, but be careful, this build is susceptible to a double team! The other great thing about this is the ease of play. Simply fire and rotate slowly, and go for the middle! You can climb the top 10 pretty fast, but as soon as people get wind that there is a king octotank, they will team up to usurp you so it’s usually short lived. To make a build that is less powerful in 1v1 battles, but also less susceptible to double teams, take one away from Bullet Penetration and add one to movement speed.

Fight/Speed – The “Bomber” is a high speed melee attacker

I call this the bomber because it is similar to a Kamikaze fighter. The tactic here is simple, use your weapons as propulsion and crash into the opponent to deal damage. I’ve also had success taking a point away from the reload and adding it to speed (Just hit 110k with it then had to answer the phone 😛 Then some punk killed my idol tank).

Flight/Speed – “The Squid” is great for quick getaways 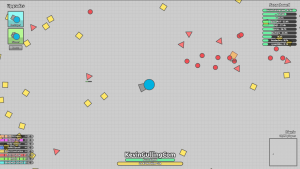 I call this build “the Squid” because it sort of reminds me of a squid “inking” and fleeing a predator. The mechanics of this build are simple enough. Use tanks that have recoil like the Destroyer or the Machine Gun and use the recoil to help propel you backwards at a faster speed.

This build is under-powered in my opinion, and even though I have reached first place with it, it was short lived and it took me about 10 lives to do it.

I’m not going to rate any of these builds because the game is constantly being updated and important values are being modified to try and keep the game balanced and avoid a “Broken Build” scenario. But I think it’s safe to say that these builds will continue to stay competitive for some time. I think we can expect the “Bomber” build to be downgraded in the future, I find it pretty powerful in both deathmatch and ffa.

If you happen to see KevinGullingCom roaming around, add a [K] tag to your name to show that you read this article and I won’t fire at you 😉

*I’m sure there are many similar builds!